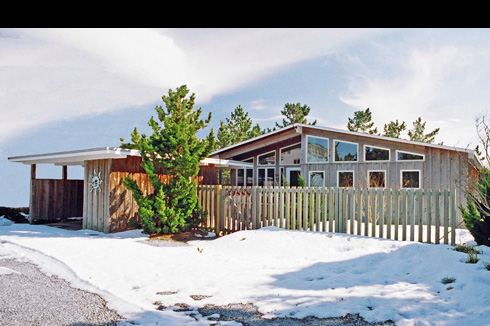 Two important goals influenced the remodel of this gem of a mid-century Modern vacation home.

First, a desire to maintain the spirit of the original 1960's Ranch design. In fact, the owners enjoyed spending many previous summers in the house directly across the street from this one. That connection, of summers past, influenced their desire to preserve the character and continuity of the property. Secondly, to the greatest extent possible, existing spaces would be better utilized and remade in lieu of adding additional space or height. Enlarging the house would breach the local "Grandfather" clause which allows existing structures, such as this one, to remain at ground level. Once breached, code requires the entire structure be elevated on stilts, approximately 8 feet above ground, to avoid the 100 year flood plane. Keeping the house low, and connected to the ground, allows the lot itself to be utilized for additional living space. Intimate indoor/outdoor rooms were created with Evergreen trees and shrubs placed on subtle earth berms. The conifers provide year round shade and screening from surrounding neighbors.